The V Games Series by Ker Dukey and K Webster

.... The Blurb  ....
Three complete books.
One boxed set.
Vicious. Villainous. Victorious.
VLAD. VEN. VAS.
Power comes from money and fear and the men of The V Games have both in abundance.
They rule with an iron fist and do it well.
Their empires are built on blood and brutality and no one is immune to their wrath… or so they thought.
When love intervenes on their path to the top, it alters everything.
The rules have changed.
Let the games begin…
**The V Games series is a dark, crime steamy mafia romance series that might be triggering to some. It's a complete fast-paced and page-flipping romantic suspense series that'll keep you guessing at every turn. This series includes Vlad, Ven, and Vas.**
.... My Thoughts   ...
In Short
- The characters are ruthless and unapologetic.
- All the characters are very different and unique to themselves.
- The storyline and characters are dark and push many boundaries.
In Long
Wow !
What a ride this series has been. I think I have felt every emotion while reading these books. It is SO ruthless and the characters are unapologetic in their ways.
I feel Ven is my favourite but ask me at a different time and it may change. What I loved is how different they are, it really kept my interest as.i truely got to know a different character each book.
Ven is by far the most lovable character with all his little quirks. I just LOVE seeing him with other characters from the book and how protective he is of them.
Vlad is ruthless and doesn't give anything a second thought. In some chapters I hated him, he is not lovable. But a other scene and seeing this different side to him, it's almost forgivable.
Vas. Oh Vas. Actually he may be my favourite. Oh I don't know. I feel he is the Inbetween of Vlad and Ven. A perfect mix.
The storyline is dark and pushes a lot of boudaries but I knew to expect that with K Webster. I have only read one fro Durkey but will 100% be reading more.
Final Thoughts
I didn't realised this was link to another series so will definitely be reading that asap.

Read more »
Posted by Books for Company at 09:00 No comments:

.... The Blurb  ....
One year. Twelve strangers. An unbreakable contract.
The first time I saw the secluded mountain-top villa, I thought it was beautiful.
Then I met the powerful men who owned such a place. They forced me to bow down before I knew their names. Exposed me to their hungry eyes.
I’m their prisoner for a year.
This is all thanks to my dead father. He left me a massive diamond mine. Everyone here wants it… marrying me is the only way.
12 months. Each one dedicated to a different gorgeous, wicked man to do as he pleases. And at the end they’ll fight over me in an auction.
There’s no love here. No kindness.
That’s what I tell myself so I can resist.
Because if I thought for a second that one of these tempting strangers could fall for me, heart and soul, I’d lose the only power I have.
If I fall in love…
That’s when I’ll truly surrender.
.... My Thoughts   ...
In Short
- This is a quick read.
- The blurb intrigued me.
- I look forward to the rest in the series
In Long
The blurb for this book really intrigued me and I have finished Sir Jasper feeling as intrigued about the rest of the series.
Sir Jasper is a quick book. There isn't a huge amount of character building but I felt it was enough for the first book in the series. Marjorie has me feeling mixed feelings towards her. She has lived a spoilt life and is very naïve. I did find myself still liking her despite how her naivety leads to her being easily lead.
I can't wait to get to know the other men which we have been given a glimpse of in this book and to see if Marjorie was right with her first impressions.
Final Thoughts
Sir Jasper is a quick read which I enjoyed and look forward to seeing where the story goes next.
Find Emily Aster
Goodreads
Facebook
Website
Posted by Books for Company at 19:00 No comments:

Read more »
Posted by Books for Company at 22:51 No comments:

*Review* The Boy on the Bridge By Sam Mariano 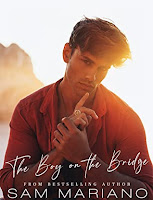 .... The Blurb  ....
The day I met Hunter Maxwell he wasn’t the rich kid who lived in the giant house, he wasn’t the most popular guy in school, he certainly wasn’t the bully who had chased his own best friend out of town after a falling out—he was just a boy with a black eye and a dark secret.
My life would have been much easier if I had stayed out of it, but I couldn’t. I saw someone hurting and wanted to help. I saw someone possibly in danger and wanted to make sure he was safe.
There’s nothing safe about Hunter Maxwell, though. I thought there might be. I fell under his spell. Whatever the world saw when they looked at him, it wasn’t what he showed me.
The bond we formed was real. I know it was real. But with Hunter, when the tides turn, you’d better hope you’re safely on the shore and out of his reach.
I thought I was a strong enough swimmer to keep my head above water. I thought if it came down to it, I could resist his pull.
I didn’t know, but now I do.
Once Hunter sets his sights on you, there’s no such thing as out of his reach. Whether it’s today, tomorrow, or five years from now, he’s coming for me—and when he does, he won’t stop until he’s destroyed me.
.... My Thoughts   ...
In Short
- I found myself thinking about this book throughout the day.
- All the characters have a lot of depth to them.
- Riley, the main character, is a huge reason I loved this book.
In Long
This is my first book by Sam and her writing is addictive and 'moreish'. I have Amazon stalked her after this book.
This is a long book and I feel it could easily have been spilt in to two, if not there, books. However the advantage to it being in one book was how wrapped up I was able to become in their life's because I haven't had to come out of it and wait for the next book. The characters consumed me and I often found myself thinking about them and their story throughout the day.
There were parts of the book I feel could have been shortened but I enjoyed getting to know and spend time with the characters so I don't see that as a negative thing.
The characters, from first to secondary, are well developed and have lots of depth to them. I love that they were all able to make me feel emotions for or about them. From sadness or annoyance and anger.
Riley is a brilliant character and very likeable. She's one of the main reasons I loved this book. I love seeing her kindness, her relationship with her mum is beautiful to see and watch it change as Riley grows up.
Hunter is a doche and at times I got mad at Riley but then I was often completely pulled in like Riley and fell for it as much as she did.
Final Thoughts
I feel like this book is somewhat like marmite. You will either love or hate it. I definitely love it.

Posted by Books for Company at 16:30 No comments:

Theirs for the Night
by Katee Robert